Cruise Passengers decrease by 2.3% in second quarter of 2016

Total cruise passenger traffic during the second quarter of 2016 amounted to 200,480, a decrease of 2.3 per cent over the corresponding period last year. 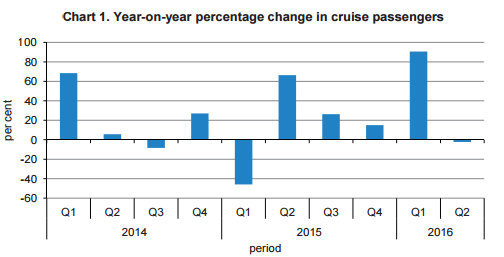 During the second quarter there were 108 cruise liner calls, at par with last year. At 91.2 per cent, transit passengers accounted for the vast majority of total traffic, reaching 182,754. A total of 2,474 passengers visited Gozo, while 4,230 passengers spent at least one night on board their berthed cruise liner.

Visitors from EU Member States comprised 73.3 per cent of total traffic, the major markets being Germany, Italy and France. The total number of passengers from Non-EU countries stood at 53,447, of whom 38.9 per cent came from the United States.

On a gender basis, female passengers made up 53.6 per cent of the total. The largest share of passengers were in the 60-79 age bracket and were followed by those aged between 40 and 59.